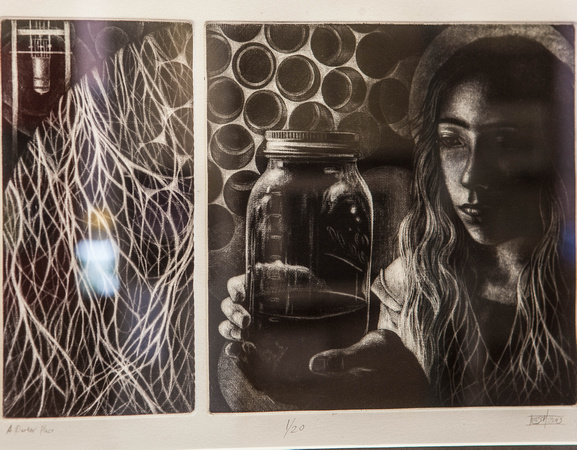 After touring the mine in April I created a free association image based on my experiences on the Sanford Underground Campus. It began by drawing my daughter holding a jar that is 23% full representing current understanding that Dark Matter constitutes 23% of the universe. Other elements I included are the nebulous strands of Dark Matter maintaining the gravitational balance of the universe, the LUX Detector and its photomultiplier tubes. This print was created using a technique called Mezzotint. To make a mezzotint an artist starts with a piece of copper and then rocking the copper with a serrated blade creating thousands and thousands of tiny burrs in the copper. The artist than burnishes the image into the burrs flattening some in gray areas and polishing them completely in white areas. Ink is then applied to the plate and lightly buffed, leaving more ink in the heavily burred areas and less ink in the burnished areas. The plate is printed to paper using an intaglio press, applying around two tons of pressure to transfer the ink from the plate to the paper. Chad Nelson is a printmaker and art educator from the Sioux Falls area. He works as an art teacher at Brandon Valley High School and as an adjunct Art faculty at the Augustana College. Nelson’s roots in fine art and craft run deep; his father studied art in college and is an accomplished woodworker and his mother works in needle point, quilting, and sewing. Woodworking, in particular, goes back many generations in his family. Throughout Nelson’s childhood he spent many hours drawing and creating things with Legos and wood. Nelson enrolled in a graduate level printmaking course in 2008 at his alma mater (Augustana College) to earn credits for his teaching certificate. It was at this time that his prolific production of prints began, producing 10 editions in a single semester (at the peak, his record still stands at 23). He went on to take two more semesters for credit before becoming an artist in residence in the printmaking studio, assisting Professor Scott Parsons and his students at Augustana. Over the last two years, Nelson has also studied printmaking at the Frogman’s Press workshops on the USD campus in Vermillion. At Frogman’s, Nelson has studied with some of America’s top printmakers, including Tom Huck, Bill Fick, Art Werger, and Deborah Mae Broad.
Photo Credit: Chad Nelson, Sanford Underground Research Facility
© South Dakota Science and Technology Authority
SDSTA
Powered by ZENFOLIO User Agreement
Cancel
Continue