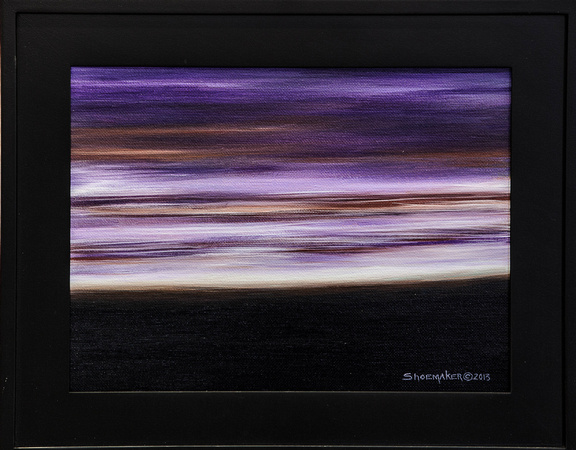 In general, I view Nature as reality and humanity's state of existence as escape from reality. From this viewpoint, my artwork explores our escape impetus: Nature's powerful polarity - its uncontrollable, turbulent environment versus its intense beauty. I then interject two concepts of a person’s solitude: harmful isolation - consequences of escapism, and beneficial isolation - forays back into reality. Since 1996, South Dakota has been my inspirational source for this artwork. Lisa Shoemaker has been a resident of South Dakota since October 1995. Prior to becoming a South Dakota resident, Lisa spent a year in Waco, Texas, making the final transition from her illustration career to professional artist. This is where she created her first watercolor series Thirteen Months - seven of these paintings were later purchased by Hermann Hospital, Houston, Texas. Between 1990-1994, Lisa lived in St. Paul, Minnesota, working as a medical illustrator while advancing her artistic development. From 1984 to 1990, Lisa lived in North Carolina, working as a staff and free-lance medical/scientific illustrator. Lisa has a B.S. degree in medical illustration from Ohio State University, Columbus, Ohio; and she grew up in North Royalton, Ohio. Some highlights of Lisa's exhibitions are: her painting Badlands was selected for Endless Imagination, 2008-2009 SD Governor's Biennial's traveling exhibit; in 2007, another painting Drop Off was included in New Landscapes 2007 (on-line exhibit), Artrom Gallery, Rome, Italy; in 2005 her painting Across the Clouds was included in Faces of Women, Las Vegas, New Mexico and her painting Fences & Wires was included in Red, Dahl Arts Center, Rapid City, South Dakota. This same painting was purchased in 2008 for SD’s Arts in State Buildings; it is currently hanging in the Governor’s Conference Room. In 2002, Lisa was selected as a 2002-2003 SD Artist Grant recipient; she used this grant for sketch trips through western South Dakota. Some of the oils paintings created with this grant were exhibited at the SD Art Museum June 11 - October 20, 2003, and at the Mundt Library, Dakota State University, December 2004. And, her watercolor painting Out of the North was included in the exhibit Local Perspectives, Sioux City Art Center, September 2003 - January 2004.
Photo Credit: Lisa Shoemaker, Sanford Underground Research Facility
© South Dakota Science and Technology Authority
SDSTA
Powered by ZENFOLIO User Agreement
Cancel
Continue