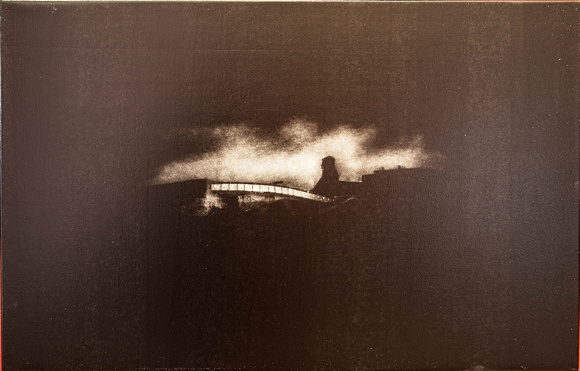 When I take a photograph, my intention is to interpret it by shading, texture, and cropping and expand that through photographic processes into some thing that transcends the pure representational context. Sometimes it is important to explain an interpretation. “The Last Ore Train” is meant to encase my 65-year relationship with the town of Lead and the Homestake Mine. It is the view from the front step of my parents’ home at 516 East Main St. Taken at night in about 1968 as part of an assignment for a South Dakota State University press photography course it originally showed much of the Metalurgical Dept. workings...the cyanide plant, the refinery, the foundry and the mill. This was the view every day with all the sounds (the Mill, the Tramway) ands smells from the time I was three years old until college but continued on a regular basis until my folks sold the house in the mid-1980’s. Much of what was in the picture in now gone...this is what I wish to show...I have turned out all the lights except in the Tramway...perhaps they were left on by the ghosts and spirits of all those tens of thousands of people who were affected by this Homestake Mine phenomonem for more than 100 years. The end for most mining towns is a rapid spiral into abandoned decay and darkness. It would seem that Lead is to be the exception...who would know that sinking all those shafts and driving all those drifts through solid rock would create an environment so isolated and pristine to solar radiation that only particles so small as to exist almost only in theory can penatrate and be measured! Imagine, all the way from the Big Bang to a tank full of Xenon on the 4850! So, the last ore train has dumped it’s load, the stockpile has been drawn down. Most of the ore-processing buildings are gone yet, in the bowels of the earth, one of the dirtiest places ever is now one of the cleanest places ever built. Where we once searched for gold and fortune we now search for knowledge.
Photo Credit: Ray Tysdal, Sanford Underground Research Facility
© South Dakota Science and Technology Authority
SDSTA
Powered by ZENFOLIO User Agreement
Cancel
Continue