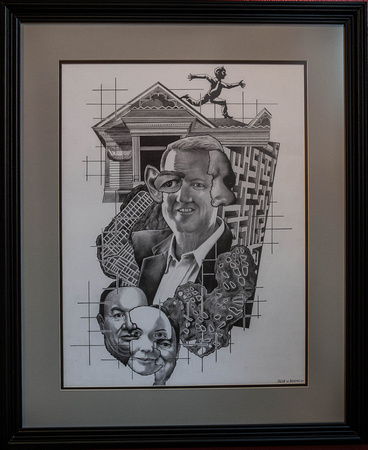 Faced with the challenge of creating artwork representing dark matter, a most elusive subject, I decided to focus on dark matter detection and the women and men responsible for that detection rather than on the dark matter itself. The man in the center of the composition is outfitted with enlarged sensory organs meant to symbolize the enhanced detection capabilities provided by the Large Underground Xenon (LUX) dark matter detector. A second nose engulfs the man’s left ear and blocks out the noise and distractions of the world around him much like the 4,000 plus feet of rock that separate the LUX from the earth’s surface will shield it from cosmic interference and radiation. Aerial views of salt ponds can be found on either side of the central figure. These manmade earthen formations represent our ability to harness the powers of nature and to find something where there is nothing. Salt suspended in clear water only to be seen upon evaporation. These clearly manmade structures also represent a desire for order, control, and structure. In the bottom left corner of the image an energetic, fresh, smiling female face emerges from the head of a sullen man. She bursts from his forehead like Athena, Goddess of Wisdom, who was swallowed by her father Zeus for fear that she would be more powerful than him. This Athena image represents the emerging role of women in science and prejudices that still remain. On the right side of the composition is a geometric maze with the words “she” hidden within its walls. This maze is symbolic of the often difficult path faced by women working in a “man’s world.” The maze is also a symbol of our desire for mental stimulation and challenge. One enters a maze knowing full well they will become lost and will have to use their powers of perception, memory, and intuition to find their way out. In much the same way scientists in the field of dark matter research are stepping into a maze of infinite scale and complexity with no clear end in sight. The home found behind the maze is another example of finding something where there seems to be nothing. Upon initial inspection a tree does not yield any clear evidence of use as a geometric building material. However, with vision, the right tools, enough effort, and an able bodied crew, a tree can be cut down, milled, turned into straight boards, and then assembled to create a shelter in a place where there was none. The scientists at the Sanford Underground Research Facility are lumberjacks of the universe set to find the tallest, straightest, and most difficult to reach black walnut tree in the forest. On top of the home a silhouette of a man runs across the roof at full speed, racing towards the goal set out before him with great vigor. The grid that permeates the perimeter of the composition represents the presence of dark matter. The grid floats in and out of existence, detectable in some areas while invisible in others. The lines of the grid can be followed visually from one side of the image to the other even though they terminate long before crossing the picture plane. Just as scientists hypothesize the presence of dark matter in the universe based upon evidence that is not directly observable you can hypothesize the location of the missing grid lines through intuition and the gestalt effect. “The whole is other than the sum of the parts.” – Kurt Koffka g
Photo Credit: Jacob Bosmoe, Sanford Underground Research Facility
© South Dakota Science and Technology Authority
SDSTA
Powered by ZENFOLIO User Agreement
Cancel
Continue