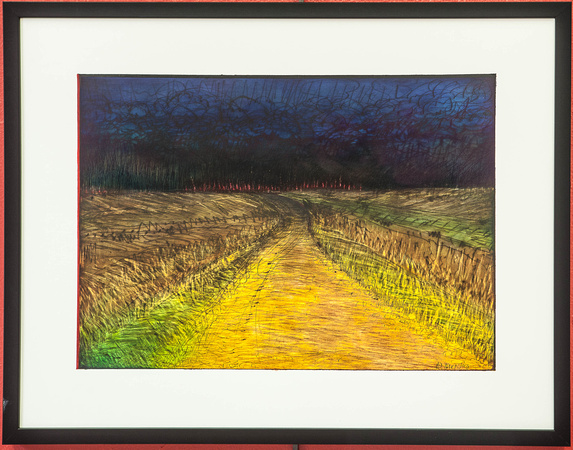 Into the Light, Darkly

Astrophysicists tell us that Dark Matter accounts for 80% of the mass of galaxies and yet it’s invisible. Dark Matter has mass and asserts itself in the tug of gravity, but it appears to be made up of particles that are almost impossible to detect. Hmmm…… This theme made my challenge as a painter (who usually deals with revealing things through color and light) very intangible. As a predominantly abstract painter, I thought this would be the direction I would pursue for this topic, but the more abstracted paintings I started were too much like images I had come across on the internet. I have been painting landscapes off and on for the past few years so I decided to start with painting a non-specific midwestern rural road journeying into the unknown darkness beyond the horizon. I began this painting with a lot of energetic etched lines and marks that recede into deep space. The painting began with bright colors and as I built up layers of oil paints, the piece kept getting darker. Denise Du Broy was born & raised in Southern California. She received her B.A. from the University of CA at Santa Cruz where she majored in Art. Denise began post-graduate work at San Francisco Art Institute studying ceramics & later moved to Santa Monica where she accepted a high school art teaching job while studying painting through the University of California at Los Angles extension program. After 12 years of teaching & painting (in 1993), Denise & her husband moved their family to the Black Hills where they owned & operated a buffalo ranch in the Black Hills & later the Cheyenne River until November, 2007. Although Denise’s professional career began in ceramics, she has been a professional studio painter since the mid 1980s. In 1989, Denise traveled to Kyoto, Japan for her first solo painting show. Since then, Denise has shown extensively throughout South Dakota & on both the West & East Coast. Her paintings are included in many corporate & private collections in the U.S., as well as Europe & Asia. Since moving to South Dakota, Denise has received three South Dakota Art’s Council Grants (2010, 2003 & 1998). She received an artist profile award in New American Paintings in 1998. In 2000, Denise won a South Dakota Advertising Award for her painting that was used on the Black Hills Playhouse poster in 1999. Denise has been in three South Dakota Governor's Biennial Exhibitions. She won the Artist’s Choice Award at the 2009 Sioux Falls Washington Pavilion’s Arts Night. In 2010, Denise had a major exhibition at the Dahl which traveled to the Washington Pavilion in Sioux Falls in 2011. Denise currently lives & works in Rapid City, South Dakota.
Photo Credit: Denise DuBroy, Sanford Underground Research Facility
© South Dakota Science and Technology Authority
SDSTA
Powered by ZENFOLIO User Agreement
Cancel
Continue