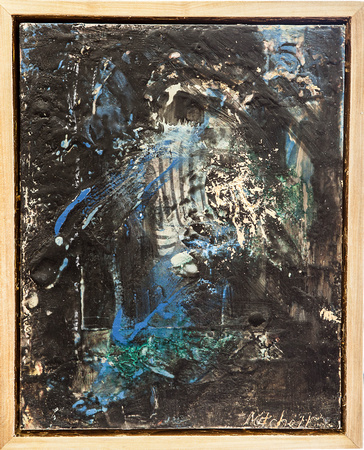 Dark matter is a mystery. Even once we have the ability to measure it, it will still be elusive. As an artist I marvel at the minds of scientists whose inquiries delve into the elemental workings of life. For this exhibition I wanted to work abstractly to convey an abstract concept. Layers have been applied and scrapped away; collage elements (essentially pieces of reality) obscured and then revealed, yet, their entirety still remains. I used gold because of its prominence in the creation of Homestake Mine and eventually the Sanford Lab. Since 1999 Deborah has served as the Director, Apex Gallery, Associate Professor of Art at South Dakota School of Mines and Technology, Rapid City, SD. She received a Master of Fine Arts, Printmaking, Utah State University in Logan, Utah in 1988.
Photo Credit: Deborah Mitchell, Sanford Underground Research Facility
© South Dakota Science and Technology Authority
SDSTA
Powered by ZENFOLIO User Agreement
Cancel
Continue