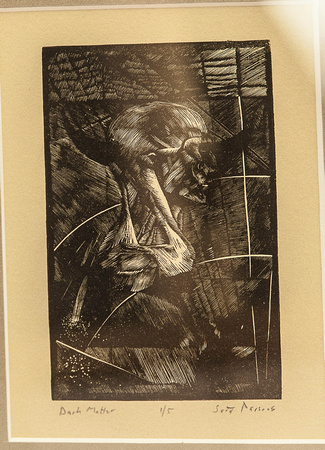 The look to the interior of the planet for dark matter seems to me to share past efforts of the sciences to look inward to describe what it is we know. My wood engraving began with the idea of an ancient ecorche study that transmuted into celestial patterns and scales, and perhaps suggests a bridge between the centuries. It also seems to me if dark matter is the stuff between what we know and see, then any artistic contemplation would involve the spaces between the silences of what we know: the spaces between the spaces if you will. This required listening to large doses of Jason Molina, who recently passed at age 39. Scott Parsons has worked in the field of public art for 20 years. He has received numerous commissions across the United States and Canada. His work includes percent-for-art and private commissions for airports, churches, museums, research facilities, university buildings and transportation centers. Parsons was recognized by Art in America for creating one of the most significant works of public art in the United States in 2002. He has received national and international awards for his art, including Project of the Year Honor Awards in terrazzo in both the United States and Canada. His work is reviewed widely, including Art in America, Sculpture, Architectural Record, Stained Glass Quarterly and Public Art Review. He has exhibited at the South Dakota Art Museum, the Dahl Arts Center, the Nicolaysen Art Museum, and the Museum of Fine Arts in Santa Fe, New Mexico. Parsons pursued graduate work in archeology while completing his M.F.A. in painting at the University of Colorado. Additionally, he has performed archeological field work in the Northern Plains region of the United States and the Chilean Atacama desert. His undergraduate degree is from Augustana College in Sioux Falls, South Dakota, where he teaches art.
Photo Credit: Scott Parsons, Sanford Underground Research Facility
© South Dakota Science and Technology Authority
SDSTA
Powered by ZENFOLIO User Agreement
Cancel
Continue